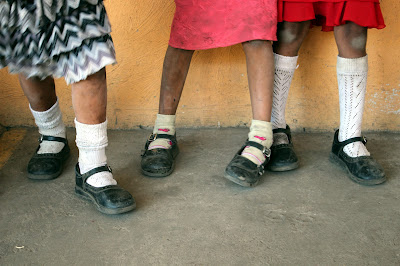 Que Sería?
Roughly translated, the question begs: What would be? Or what could be?
Or possibly even, WHAT IF?

Quite aptly named, the town of Queseria sits at the bottom of an active volcano. A volcano that constantly spewed a combination of ash, lava, and smoke throughout our entire time in Mexico- a constant reminder of just what could be...

Arriving to our third Mexican show, which happened to be in a migrant labor camp in the above mentioned Queseria, we were greeted by about 50 of the most curious and dirt streaked small faces I had seen in a long while!

Quesería is located high on the slopes of the Colima Volcano. The surrounding hills, composed of ancient volcanic soils, provide ideal conditions for growing sugar cane; therefore a large sugar refinery is in operation. The workers who burn and cut the sugar cane on the mountain are indigenous peoples who speak Nahuatl or Zapoteca and are brought up from the Southern regions of Mexico by labor bosses. These families often live in what could be called a ramshackle box- at best. The housing generally consists of one concrete room per family, with an attached lean-to for a kitchen. Though material possessions were few among the local children, delight and curiosity were available in abundance. This was easily one of our most delightful audiences to date! 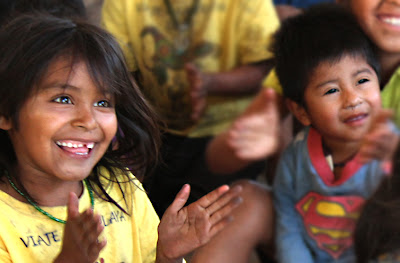 Project Amigo, the organization that arranged and supported us through our visit, has been active in this camp for many years. Over time, Project Amigo has built two classrooms, a kitchen, children's bathrooms, brought in playground equipment, and hired three teachers to educate the migrant children. There was an interesting glimmer of western influence in the donated clothing the children were wearing; and there is nothing more ironically heartwarming than seeing a shy and tiny dirt-streaked face framed by a Superman pajama top. 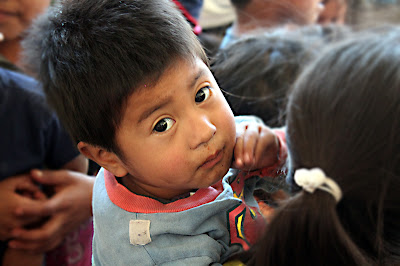 Posted by Paula Greenspan at 12:23 AM