An excerpt from the Bread & Roses blog:

We are making a special effort to bring more interactive programs to audiences across the board, especially to children and youth. Many talented performers excel at putting music and stories together in an interactive way with magic, movement, puppets, juggling and other performance art. Recent efforts include a wonderful clown workshop with much audience participation by Circus of Smiles at 24-Hour Childcare in Oakland.

Host Barb Withers reports: “At first, the 30 young children quietly sat cross-legged on the carpeted floor with anticipation in front of the two clowns - Paula Greenspan and Tyler Parks - who are known as Circus of Smiles.

They began their show with a hysterical juggling act with Tyler wearing a fake mustache [Paula Edit: While we appreciate the compliment, I have to point out that his mustache is real.] He and Paula tried to "wake" each other up, each time unsuccessful, and were met with peals of laughter from the children. Tyler noted while juggling that it was tickling his mustache and the kids giggled along. Juggling, tumbling and physical comedy reigned in the room, much to the delight of the children and their teachers. Giggling, bashful volunteers loved being part of the act and many eager hands shot up when the call for volunteers went out.

The show was a seamless fest of smiles and at the end Circus of Smiles admonished all the kids to "give yourselves a pat on the back." They gave each other pats on the back that cause the kids to dissolve into further laughter. The show caused 30 kids to stop for 45 minutes and just enjoy being light-hearted. Circus of Smiles provided the best medicine for all of us attending this fun show!”

The children at this daycare center for low-income families in Oakland would not have access to this kind of positive interaction without the generosity of Bread & Roses volunteers and supporters. 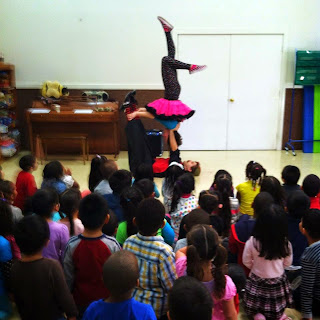 Posted by Paula Greenspan at 8:30 PM